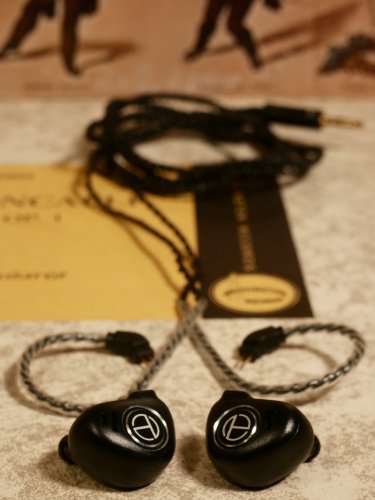 TRN are mostly know for their dual DD dual BA’S iem call V80, wich get very popular due to their very affordable price, bass and vivid sound and excellent construction. While I wasn’t a big fan of mid range tonality and timbre as well as treble, i can understand why the V80 became so popular for average audio enthusiast because the V80 are everything but boring or lacking in bass or details.

Now, after lot of water pass under the bridge, i decide to give second chance to TRN company by testing their new budget killer V90 iem that score 1DD+4BA’s in a very well crafted metal housing.

What hook me is really the look of V90, as well as the drivers implementation.

Priced around 40$, the TRN V90 can be a very promising iem in term of value, let’s see if it’s the case in this review.

DISCLAIMER: No disclaimer needed as I buy these with my own absurd money. 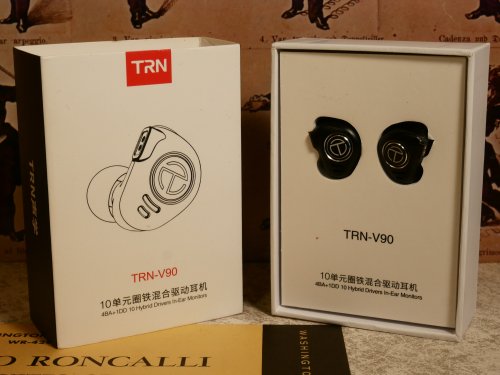 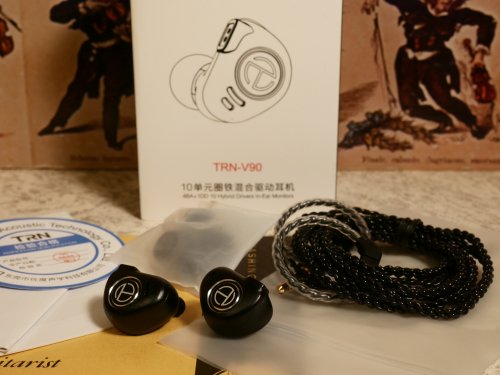 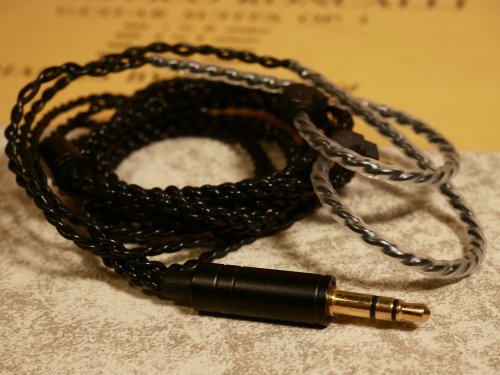 UNBOXING is boring. And this is surely to keep price as low as possible so i do not complaint to only have a little KZ like box with 4 pairs of silicone eartips and an okay cable as accessories. 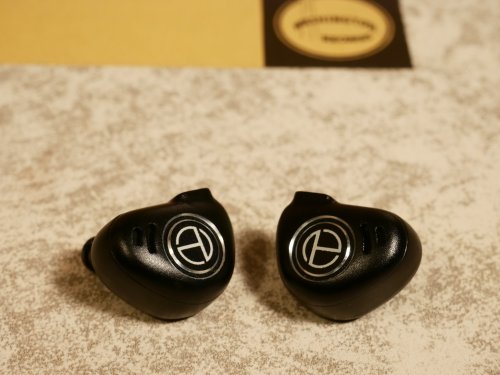 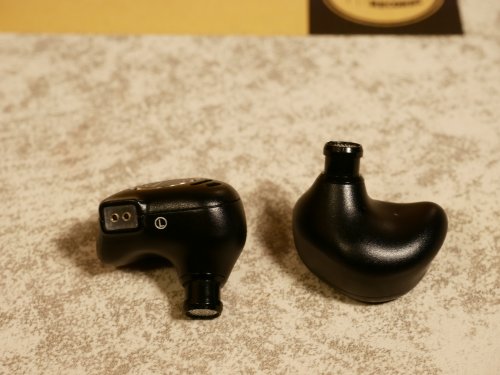 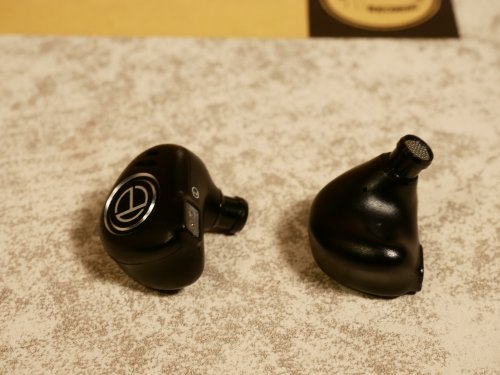 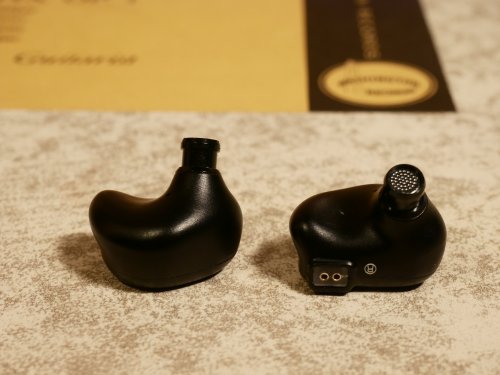 CONSTRUCTION is very impressive and I would have say that even if these sold 100$, its beautifull brushed metal that promess good sturdiness and do not show craftmanship flaws. Only part of plastic is the nozzle and 2pin connector wich are both well assembled in the body. The housing is a little similar to BGVP DMG (or NiceHCK M6) but smaller and more comfy. Cable is nicer than the one we can get with KZ or other Chifi brands, but its still standard braided copper one. 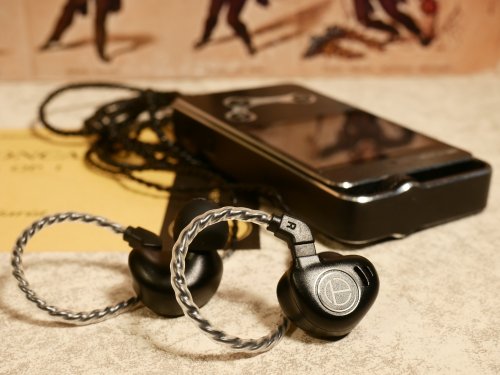 DESIGN is very well done, it have an organic shape that fit naturally in ears. As well, their 2 big venting hole in the back, wich have a purpose but to the cost of affecting isolation and sound leakage negatively. 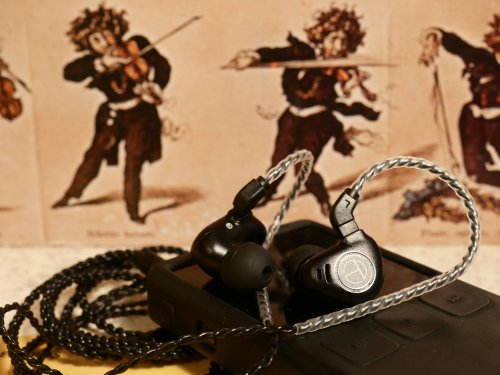 OVERALL SUBJECTIVE APPRECIATION is positive in term of technicalities while its mitiged in term of musicality. I say this without even taking the price into account, and would say the same thing if they cost 5 or 10 times the price. The V90 are VERY capable iem that deliver a revealing sound with clear accurate imaging, well extended bass, bright but smooth tonality and transparent slightly dry timbre. While the treble deliver plenty of details with good crispness, its never treble, wich explain why i admire the tuning work at 99%.

SOUNDSTAGE is out of your head with an holographic feel, its not the widest but have above average deepnest and tallnest for its price. Its circular and time to time you will find yourself turning your head to ‘’see’’ a sound on your shoulder….or perhaps i’m just on Acid right now?

IMAGING is above average for its price, its a mix of transparency and accuracy wich give spacious instrument separation that never feel forced or unbalanced. Okay, here, its the mid range that is sharp in separtion, the bass is less good and treble is less natural. Let’s be grumpy and search for subtle imperfection!

CLARITY is excellent, again, especially in mid range and highs, the bass is less clear and more their will be instrument, more it will sound tamed and muffled (aka, less clear).

TIMBRE is where MY musicality is negatively affected, this should be take with grain of salt because i’m very sensible to timbre unlike some people. To me it lack thickness and naturalness, it’s slightly dry and just a little grainy with its emphased texture.

TONALITY is on the smooth side of the Bright, yeah, more you go up more this brighness show itself. In upper mid bass, you will know its there.

BASS have good extension, sub bass being bumped with good rumble and transparence while mid bass is soft and thin in body. We are in dry bass territory, but even if rather thin, the sub bass body can offer good weight sometime. This type of bass, due to its softed attack, will lack body to some. Its remind me the type of bass we get from planar earphones or headphones, wich is strange…but this isn’t hefty thumping bass wich can even be good for jazz music because the acousticbass line will extend well without veiling mid range. Yep, this bass respect mid range, perhaps a little too much tough.

MID RANGE is EVERYWHERE. The V90 cover full mids frequencies up to 8khz, not in a super flat way, but in a vivid, fowards and slightly bright way. To my ears, this is mostly delicious because most of instruments do benifit in clarity and accuracy in this range, its not just about vocal here, so this isn’t tuned to underline presence of vocal only. This is audacious because it will sure affect naturalness of musicality to try to extract everything in mid range so here we come: it sound a little clinical and have some upper mids sibilance. But never in a disastrous way, even V80 were more sibilant than those. To have this level of clarity and separation in whole mid range at this little price is really what make Chi-Fi miraculous for budget audiophile. As well, i do not find any isntrument or voice sound harsh or too agressive, and this is surely due to great transparency of mids. Again, i tell you the ying and the yang is that vocal can sound thin and too intimate. As well, instrument attack is softed, another explanation to benificial lack of harshness for such a revealing sounding earphones.

TREBLE is sharp and very extended and avoid to be trebly. We do not have lot of sparkle and decay, but crispness is there for sure. I would love more sparkle but i can live with that due to rather good attack and brilliance, wich is tigh and super controled. No splashiness or too fowarded percussions that will step on mid range here. In fact, treble make the V90 sound hyper-realist instead of lushly natural. 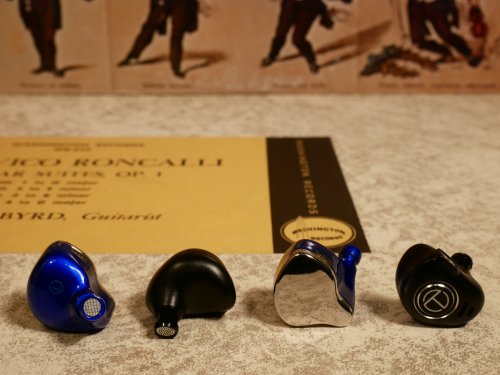 SOUNDSTAGE is more out of your head, significantly taller and wider than the V90 but not has deep and clean.

BASS of Hibiscus is thicker, weightier and juicier but lack transparence and separation with mid bass wich sub bass warm, V90 is dryier and a little more textured and while the punch is thinner it still feel more controled and clearer, making kick better separated.

MIDRANGE while sounding more natural and liquid with the Hibiscus, is darker and less clear than V90. Vocal sound wider but less foward than V90, as well, whole mid range is less detailed and energic, lacking definition in attack and sounding very mellow compared to more energic V90. TREBLE is smoother and little roll off compared to sharper and crisper V90 that certainly dig more mircrodetails than Hibiscus.
ALL in all, Hibiscus is smooth U shape sounding compared to more neutral and agressive V90. 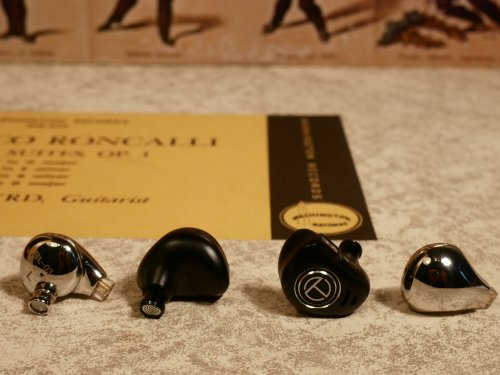 So, this is the real battle everyone is waiting for. Well, let me begin by saying you should get BOTH!
Why? Cause they are near opposite sounding iem. V90 is technical beast for its price, to the cost of having a colder musicality. Let’s see why.
SOUNDSTAGE is notably taller and wider with the BLON, while the V90 have slightly more deepnest but still lack this out of your head more airy presentation of BLON.
IMAGING is sharper and more precise with the V90, but its more congested as well, while BLON do not offer as much layers of sound it tend have better macro-imaging as a whole, while mid range imaging of V90 is clearly superior.

CLARITY is crisper and more detailed with V90, diging alot more micro details as well a making the sound brighter than BLON.
BASS is thicer, weightier and rounder with the BLON, the V90 bass feel quite thin and dry compared to it as well as lacking naturalness in timbre wich is very enjoyable with the BLON even if it gently warm lower mid range.
MID RANGE isn’t just warmer with the BLON, its fuller, thicker and more pleasant for they ears than more fowards, clinical mids of V90. While technicaly its ‘’better’’ and offer higher definition and attack ,timbre is more artificial and even sometime a little shouty at high volume.
TREBLE is more emphased with V90, its agressive without being super trebly, but it feel less balanced and little more splashy than smoother rounder BLON treble. Treble head joy to the cost of less lushness in musicality. As well, BLON have more sparkle-decay and air between highs.

ALL in all, my favorite is the BLOOOOOON because of a more natural and refined tuning with lusher timbre and more laid back enjoyment that do not forget to offer highs sparkly in its big airy soundstage. 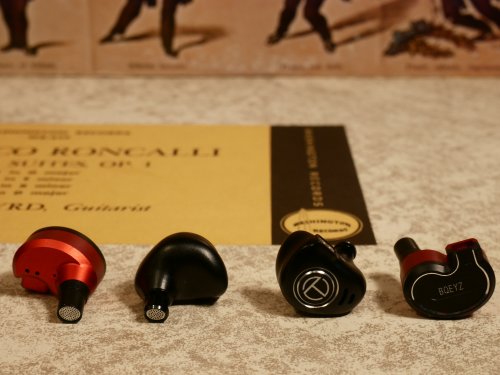 I find these 2 slightly similar and mid centric, but V90 is more analytical with treble and thinner-dryer in timbre.

SOUNDSTAGE is wider and slightly deeper than V90, its not night and day different tough.
IMAGING is more detailed but less spacious than KB100 , still definition of instrument separation is better.
BASS is more pumped in sub region with the V90 and give more slam than flatter KB100, wich have tigher bass and better separation between sub and kick.
MID RANGE is smoother, thicker and more natural with the KB100, as well, vocal have more presence and less sibilance. V90 have more detailed whole mid range, wich is thinner and more artificial sounding.
TREBLE is more emphased with V90, offering more micro details but less natural resonance, making it as well a little trebly and overly analytical.

All in all, KB100 are smoother and more mid centric, wich is translated in better vocal tonality and timbre, while the V90 is more bassy, vivid, mids aggresive and analytical with slightly more saturated dynamic. 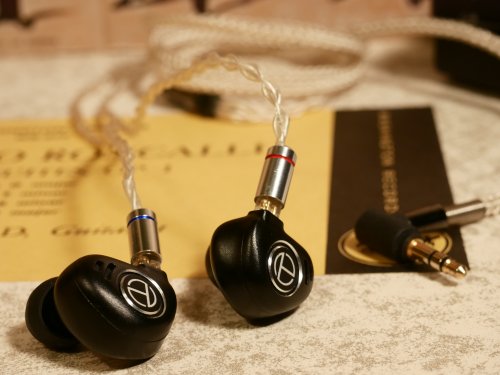 While the TRN V90 are perhaps not the Giant Killer I was expecting it to be, its the best tuned one I try until now.

The construction is phenomenal, the sound is vivid, detailed and well enough balanced and the price is very affordable. Sure, again, timbre deliver by cheap balanced armature aren’t as natural as cheap dynamic drivers or knowles BA’s, but it isn’t as harsh as other offering in this price range too.

To get this level of sound definition from low to highs at less than 50$ is something to applause, and to me it proof that TRN are working hard and slowly evolve with their tuning abilities. Now, its more about acoustic spacial perception as well as sound timbre that they should study more and i’m confident they will do nail perfect tuning balance in a near futur.

HISENIOR T2U Review is up.
Got the chance to have fast listen to 4 killer IEM.
DUNU LUNA.
HIDIZS MERMAID MS1
Follow No Borders Audiophile on WordPress.com
%d bloggers like this: