I just receive the new NiceHCK N3 and until I write a proper review I decide to share some first impressions and extra info about this very unique earphones.

Firstly, this is what inside the N3 full metal belly: 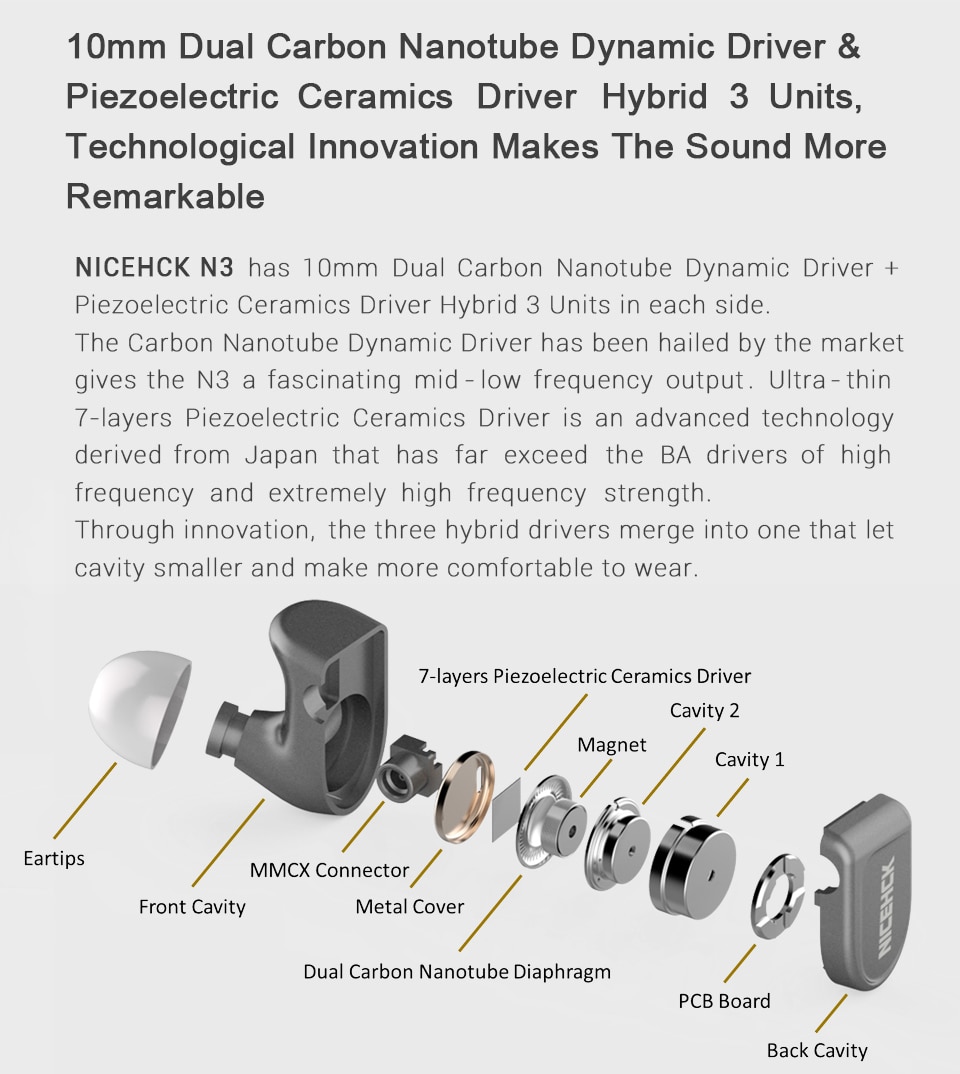 So, HCK say it have 3 drivers …why exactly? Because dual carbon nano tubes work as 2 drivers, These drivers most likely deal with bass and mids while the piezo electric that can cover high range treble is used for highs.

Some basic info about this mysterious nano tube:

“About carbon nanotubes speakers. The tiny speaker doesn’t rely on moving parts and instead produces sound through the thermoacoustic effect. When an alternating current passes through the nanotubes, the material heats and cools the air around it; as the air warms, it expands, and as it cools, it contracts. This expansion and contraction creates sound waves. The new nanotube speaker could be manufactured at low cost in the same facilities used to make computer chips, the researchers say.”

”15 Two big groups of piezoelectric materials can be distinguished: one group of those materials which have piezoelectric property naturally like quartz, berlinite or tourmaline, and another with the ferroelectric materials. These are synthetic materials that acquire the piezoelectric attribute after having been polarized, such as lithium tantalite (LiTaO3), lithium niobate (LiNbO3), zinc oxide (ZnO), barium titanate (BaTiO3) and one of the most widely used, lead zirconate titanate, also called PZT (because of its molecular formula Pb[ZrxTi1-x]O3). 2.2. Piezoelectric driver[3],[4],[5]Piezoelectric crystals are used in numerous ways such as high voltage and power sources, motors, sensors, frequency standards and also actuators like loudspeakers. The main part of the speaker is the piezoelectric diaphragm. This consists of a piezoelectric ceramic plate which has electrodes on both sides and a flexible metal plate (normally brass or stainless steel). The piezoelectric ceramic plate is attached to the metal plate with adhesives. Fig. 2.2: Structure of piezoelectric crystal. Reproduced from [3] Applying D.C. voltage between electrodes of a piezoelectric diaphragm causes mechanical distortion due to the piezoelectric effect. This can cause that the diaphragm bends as it is shown in Fig. 2.3.a). And conversely, the ceramic can shrink by applying a different voltage, bending the diaphragm on the other direction (Fig. 2.3.b). Because the ceramic is bonded to a rigid frame, the diaphragm recovers its original form when the voltage stops.

16 Thus, when AC voltage is applied across electrodes, the bending shown in Fig. 2.3-a and Fig. 2.3-b is repeated as shown in Fig. 2.3-c, producing sound waves in the air. Fig. 2.3: Oscillation of the piezoelectric crystal when voltage is applied. Reproduced from [3] Crystals can be monomorphic, comprised of only one crystal and bimorph, formed by two crystals with an opposite movement between the plates so that one expands and the other shrinks. The electric configuration can be series or parallel. Next image shows the differences between bimorph series and parallel types. Fig. 2.4: Electric configurations of piezoelectric crystal. Reproduced from [http://www.fuji-piezo.com/Bimorph.htm] Due to the high mechanical impedance of the mineral employed in the fabrication of the crystals, the frequency response of these devices is restricted to the high range. It is because of the rigid frame attached to the mineral and its weight why

17 the crystal does not have the fundamental resonance frequency out of the audible range (20 – 20 kHz). Horn tweeter is the most widely used piezoelectric speaker. It consists of a circular disc attached to a cone which radiates sound through a plastic horn. The cone is typically made from lightweight, stiff materials such as coated paper, plastic resin film. As it is shown in the next figure, the cone is attached to the centre of the membrane since it is the point where the displacement is maximum. Fig. 2.5: Piezoelectric diaphragm and modes of vibration of the crystal. Reproduced from [5] This is the configuration of the loudspeaker employed in the experimental part of the project.” Source:http://oa.upm.es/33068/8/TFG_javier_fernandez_martinez.pdf

NOW, because of this particular drivers implementation, I consider the N3 hard to drive. They have quite a high impendance for iem wich is 55ohm and rather low sensibility wich is 100db. Out of my rather powerfull (for its size) Xduoo X3ii, it sound dull and thin. When I use the Xduoo X20, soundstage open ALOT. From first I hesitate between categorizing the N3 as Mid centric or W shape, but what impressthe most is sure soundstage size and airy presentation, this do not sound like typicale IEM at ALL! Still, Ineed to try different pairing and amping, as these look sensible to this factor.

CONSTRUCTION is nice and very sturdy, the polished metal is well stick togheter and must of all, it-is-comfortable. Well, for my ears, sure, there no other way than wearing them over ear with this design but it slip the the ears naturally.

As see, they are big, but not KZ ZS10 BIG, these will fit most ears I thing.

So, this time accessories are minimal, but at least of good quality. No protective case, but a real NICE cable, feel sturdy and its a beautifull SPC with good quality L jack. Sometime we get bad cable with chi-fi, niceHCK isn’t an exception as even the one with M6 was so so and strangely affect sound quality. Now, even if I do not measure this cable, I feel it sound right, so its the one I will use Alway for N3.

Will share a full review soon, hoping to receive my SENFER DT6 this week to make proper comparaison with another Piezo Hybrid earphones, because the DT6 is pretty hyped on headfi and beyond.